The Journey of a Medical Student

Throughout the month of February, the staff of Evansville Regional Vein Center had the pleasure of having a medical intern, Adam, with us learning about vein disease.

Adam is currently a medical student at Kansas City University of Medicine and Biosciences where he will graduate this May. He attended undergrad school at IUPUI and is from Newburgh, IN. Prior to interning with Evansville Regional Vein Center, Adam interned with the Deaconess network. His next internship is with St. Mary’s Hospital in the Emergency Room. Adam said he found oncology and hematology to be the most interesting fields and plans to specialize in them.

Adam’s story isn’t your typical med student story. When I asked him why he wanted to become a doctor, he replied with, “That’s a good story.” You couldn’t tell now, but Adam did not excel in high school and never had a desire to do anything except work after graduating from school. His mom gave him no other choice than to go to college. What Adam figured out was that he really enjoyed science and he did more than excel in college, graduating with a 3.7 GPA.

During school he started dating a daughter of a pathologist. After getting to know the pathologist and the rest of the family, Adam became interested in the medical field. That family made him realize he needed to work hard in life and nothing was just handed to you. Soon after that, a friend of Adam’s recommended that he volunteer at Riley’s Hospital and consider becoming a doctor. Adam took his friend up on that idea, and let’s just say, the rest is history.

Even though Adam is no longer dating the daughter of that pathologist, we are all glad he was introduced to that family, received the nudge from his mom who so very much believed in him and had a friend that saw his potential, because in February we all witnessed a man who has the desire and passion to help others and the determination to make a difference.

Thank you, Adam, for letting all of us at ERVC be a part of your journey. Although you don’t need it, best of luck to you! We believe in you. 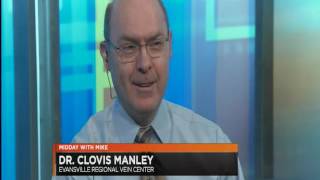 Dr. Manley is your local Ask The Expert for vein disease

Dr. Manley is your local Ask The Expert on varicose vein treatment.

New signs for Evansville Regional Vein Center are up

Dr. Manley is your local Ask The Expert for vein disease

Dr. Manley is your local Ask The Expert on varicose vein treatment.

Are You Experiencing the Symptoms of Vein Disease?

Join Us For Our Free Vein Seminar